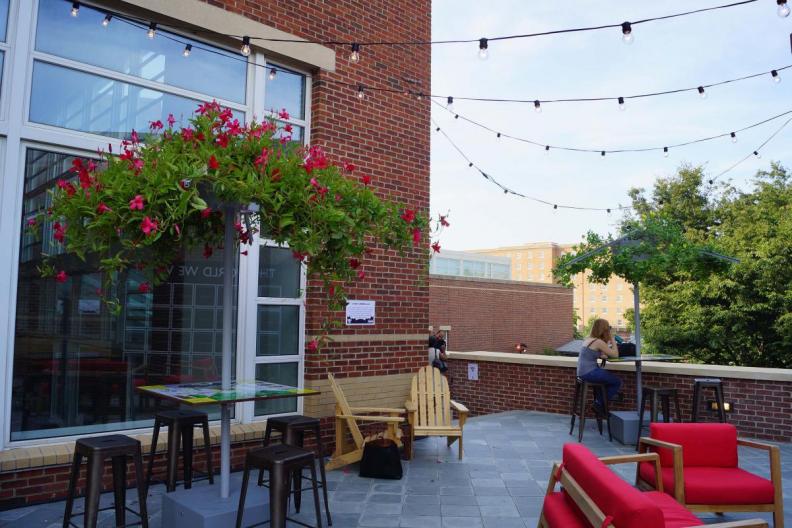 Living Umbrellas is a newly developed green infrastructure and experience from the minds of four individuals of the Department of Environmental Science and Technology at the University of Maryland. Nicholas Cloyd, Dr. David Tilley, Tim Williamson and Dr. Jose-Luis Izursa came together with the idea when one of them sat at a pool without shade. Questions arose—why were there no shade structures and why do we not cover umbrellas with green?

Flowers hang over an open framework to provide a shaded canopy. This sustainable technology is user-friendly with its stand-alone irrigation system and also acts as a pollinator habitat. As an incoming master’s student, Nicholas Cloyd was interested in the project and is now researching with the Living Umbrellas.

There are two parts to Cloyd’s research. The first is evaluating the microclimate of the shading area underneath the Living Umbrella and comparing it to that of a traditional umbrella or shade tree. He will be evaluating solar and UV transmittance, in other words how much energy from the sun is blocked by the Living Umbrellas. He will also be evaluating the mean radiant temperature, which gives a better inclination of the thermal condition and comfort that a person will feel under a Living Umbrella. It gives a heat index, which allows you to understand what it would feel like to be in a certain climate or environment.

The second part of his research involves a social experiment in which he evaluates people’s biophilic connection with the Living Umbrella and the surrounding environment. The team wants to determine if small-scale green products like the Living Umbrella can relate to larger-scale green infrastructure. The team also theorizes if these products provide some of the same benefits through stress reduction or comfort and do they promote environmental stewardship. Cloyd says, “Does being around a structure like this create a feeling of responsibility, relationship and connection with nature?”

The first step in making the Living Umbrella was figuring out the design. Then, the team found some resources and grants, specifically commercialization and innovation grants that find startup companies on college campuses and aid them with commercialization of technologies or software. This involved taking courses and lectures to learn about the business side of these umbrellas. The team worked with different groups to develop the company and the brand, Living Canopies. “We look at ourselves as a group of ecological designers, and our main purpose is to develop products that aid in bringing people to nature and nature to people,” says Cloyd.

The goal is to create products that act as area creators, or experience makers, so that people can garner a certain feel about the area that they’re sitting in. “But beyond that, we’re trying to spark people’s imaginations in terms of thinking, designing and engaging with nature. Creating a symbiotic relationship with natural processes so that both nature and we can gain from interactions that we’re having from each other. It’s more than just a product. There’s a mission behind it,” says Cloyd.

The team started building the Living Umbrella in the back of the lab in the Animal Science building. They stripped off the canopies of some umbrellas and started placing water-catching membrane and planting on top and seeing how plants grew.

Cloyd says, “The first time that I went in and saw the greenhouse space that we had, it looked like they were conducting all sorts of crazy Frankenstein experiments with trying to get bushes to grow down and sloped instead of up and out. They were talking about using carbon dioxide to try to train plants to grow in the right conditions and fashion.”

But, after months of deliberation and countless hours in the design lab, the team made the first Living Umbrella in the Department of Environmental Science and Technology’s Project Development Center. “We had a repurposed cooking wok as our soil container. It was pretty MacGyvered together, but we used it as a stepping-stone to really prove our design and provide proof of concept that plants can grow in this manner,” says Cloyd.

By working with a fabrication company in Hollywood, Md. once they had a solid design, the team could complete the design process and produce the Living Umbrellas that were on display at NextNOW Fest 2016 at the Clarice.

Cloyd says that this is definitely an ongoing process and hopes that it will continue to be an ongoing process. He also hopes to see Living Umbrellas everywhere, especially in urban areas and other places where they are needed the most. The team is trying at a universal design of their product so that Living Umbrellas can be just about anywhere—backyards, hotels, restaurants, stadiums and amusement parks.